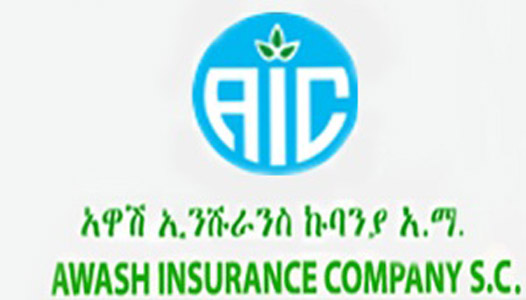 Awash Insurance, which celebrated its silver jubilee, has managed to boost its net profit by 31pc to 209.8 million Br during the past fiscal year. The firm also managed to reverse the decline in shareholder return.

Two years ago, Awash’s earnings per share (EPS) slipped by 17pc despite the increase in profits; however, the return for its 1,384 shareholders has registered a marginal rise in the last fiscal year by 5.3pc to 200 Br. Yet the EPS is still lower than that of two years ago, which reached 230 Br.

The decline in EPS must have been caused by the injection of massive fresh capital, according to Abdulmenan Mohammed, a financial statement analyst with close to two decades of experience.

A surge in investment income is the main factor for the improved profit performance of Awash, which was established in 1994 by 456 shareholders. Interest earned on savings increased by 24pc to 90.7 million Br, and dividends earned on investments rose by 75pc to 97.3 million Br.

Expenses of Awash have also increased in line with total income. Awash’s salaries, benefits, and administrative costs increased by 15pc to 253.8 million Br.

During the year, the firm opened one full-fledged branch at Legetafo and two contact offices at Jigjiga and Aqaqi, pushing its total physical presence to 57 locations. It also hired 62 new staff members during the year, reaching a total of 588 employees.

Coming to the main business stream of the firm, general insurance remained more or less the same. Its underwriting surplus increased by only two percent to 277.2 million Br.

Awash’s gross premium went up by 12pc to 893 million Br. Out of this total, 27pc was ceded to reinsurers. The retention rate decreased from last year’s rate of 77pc.

Usually, the company buys treaty insurance from reinsurers by transferring all the risks of a specific class of policies.

Claims paid and other provisions careened upward by 18pc to 380 million Br.

The total assets held by Awash increased by 15pc to 2.9 billion Br. The growth rate is the same as the preceding year’s rate. Out of total assets, 772.4 million Br was invested in interest-bearing deposits, 281.8 million Br in investment properties, and 365.8 million Br in shares and bonds.

These investments accounted for 49.5pc of the total assets of Awash, the same proportion as the preceding year.

The liquidity level of Awash significantly increased. Cash and bank balances went up by 59pc to 134.3 million Br. The ratio of cash and bank balances to total assets increased to five percent from 3.4pc. Even though the liquidity level of Awash showed improvement, it was still lower than the industry average of eight percent in the 2018/19 fiscal year.